Be sure to visit IGN Tech for all the latest comprehensive hands-on reviews and best-of roundups. Note that if you click on one of these links to buy the product, IGN may get a share of the sale. For more, read our Terms of Use.

While the HP brand name might cause anyone to instantly think of printers and affordable laptops, the company has been inching its way into the PC gaming hardware space over the past few years with its Omen brand. Adding to its line of gaming-centric desktops and laptops, the Omen 27 (See it on Amazon) is a 27-inch monitor built for gaming, first launched last year. With a 2560 x 1440 resolution, a refresh rate that can reach 165Hz, and Nvidia’s G-Sync, it is packed with features PC gamers demand from a modern display. But as with all high-end monitors, the details really matter, so we put this display through its paces to see how it stacks up. 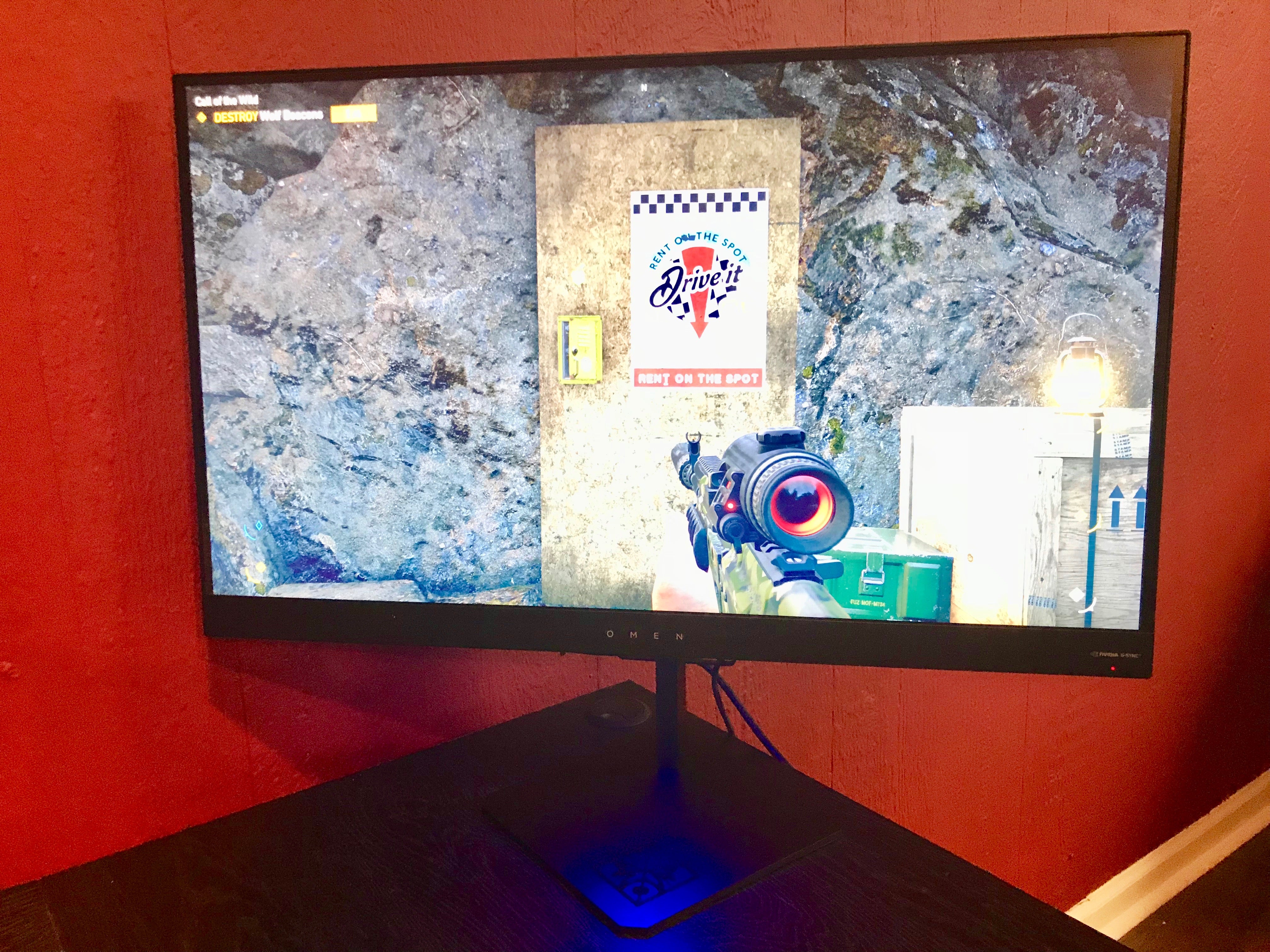 The Omen 27 has an understated aesthetic. The matte-black finish covers nearly every surface, save the stand made of sturdy (also black) metal. Personally, I can appreciate a monitor that doesn’t try too hard to scream “gamer” with over-the-top design elements. The base of the stand has a pleasingly small footprint, and just like the back of the monitor, the base features the Omen tribal mask logo (which is itself the old VoodooPC logo, for geezers like me). The logo on the back is red and stands out nicely on the textured plastic coating.

Raising and lowering the monitor to the right height works great, but there’s disappointingly no swivel or tilt available on the Omen 27 stand. I like to use my monitor on the corner of my desk, and getting the angle right requires turning the entire monitor base. There’s a customizable LED under the bottom edge of the display and it’s possible to cycle through six colors, set a static color to match your setup, or even just set it to a dimmed setting for use as a task light. You can also make custom RGB colors using sliders, which is very cool. I found the light to be unobtrusive and actually very convenient when needing to read something quickly in a darkened room.

Under the hood, the Omen 27 uses a Twisted Nematic (TN) panel since this is a gaming monitor. Overall, TN panels offer fast refresh rates and equally zippy response times that IPS panels simply can’t match, so they have their advantages. This holds true with this display’s fast 165Hz rate and a 1ms gray-to-gray response. But on the negative side, TN panels have poor viewing angles, don’t handle black levels as well as IPS panels, and don’t have the same color accuracy, either. While TN panels aren’t exactly going the way of the dinosaur any time soon, the technology is certainly being replaced to some extent as faster IPS, VA, and quantum dot panels enter the market.

On the back of the monitor, there’s a small range of down-firing I/O ports. One DisplayPort 1.2 and one HDMI 1.4 port are the sole display hookups available, and you’ll need to use the former to access G-Sync and the 165Hz refresh rate. There’s also two USB 3.0 ports, which is a bit surprising since gaming monitors in this price range usually have four.

The on-screen display is controlled by four buttons placed on the back of the lower right side of the Omen 27. The buttons have a low profile, and while they’re not as annoying as capacitive touch menu buttons, I found it a bit frustrating to discern which button I was actually using. The menus themselves are a rather boring white and gray list that took some getting used to—they’re not very intuitive and quite frankly felt out of place on an otherwise sleek, handsome monitor.

As usual, I tested the HP Omen 27 by taking a deeper look with the Lagom LCD testing pages. These tests offer a simple way to analyze the monitor on performance metrics like contrast, response times, gamma accuracy, and viewing angles. Needless to say, the Omen 27 is a very fast monitor and its grey-to-grey response time of 1ms held true. Even on darker transitions, this display—like most TN panels—offers wonderfully quick speeds. In contrast tests it didn’t perform quite as well, as the brightest colors in a spectrum bled into each other slightly. This also led to less than stellar black levels. Placed against a black background, the darkest tones were noticeably dark grey.

This may have something to do with the overall brightness of this TN panel, as well. At its normal settings, the Omen 27 is noticeably bright and when looking at white checkerboard contrast patterns on Lagom tests, the lightest tones did disappear somewhat into the white background. Thankfully, the Omen 27 does handle gradient transitions well, with no discernible banding. And while the screen may be a tad bright, gamma levels were very acceptable and sat near the Windows standard 2.2 level.

Viewing angles left something to be desired when moving vertically above or below the monitor, and with a TN panel, this is to be somewhat expected. Horizontal movement also showed some variation in color accuracy, but in terms of TN panels, the Omen 27 does so as well as can be expected.

I also tested the Omen 27 by taking a look at the TestUFO tests at Blur Busters. This allows me to check for any noticeable artifacts, or ghosting, left behind by quick moving objects on screen. This monitor performed exceptionally well in this regard, with no visible ghosting whatsoever.

I spent many hours gaming on the Omen 27, playing Far Cry 5, Overwatch, and PlayerUnknown’s Battlegrounds. Overall, games look great on the WQHD display, but again I noticed the overall brightness of the picture was too high. I did adjust the luminance through the on-screen menus, and by and large, my eyes adjusted in time. Images appeared sharp on the display, but as a whole games didn’t look quite as good as on the comparably featured (and slightly cheaper) AOC Agon AG271QG (which I was testing at the same time). This likely has to do with the AOC’s IPS-style display, no doubt.

G-Sync works great on the Omen 27, with no visible screen tearing during any of my time spent with the monitor. It is worth noting this display also offers ULMB functionality, but it can’t be used at the same time as G-Sync. Personally, I didn’t perceive any motion blur issues with the Omen 27, and considering the obvious appeal of 165Hz refresh rates with G-Sync, ULMB is likely a feature that won’t get used much.

Games performed well on the Omen 27, though, in terms of just feeling fluid. A 165Hz refresh rate and 1ms response are nothing to scoff at, even in a world where the blisteringly fast 240Hz Alienware 25 exists. Overwatch ran spectacularly at over 144 frames per second using the highest settings on my GTX 1080 rig, and with G-Sync enabled everything just worked flawlessly. In terms of twitchy, fast gaming there really isn’t any way to overstate just how great a fast monitor performs and how wonderful it feels. So, while the black levels and brightness left something to be desired, the Omen 27 is certainly a strong contender for this type of gaming.

The Omen 27 is a pleasingly simple monitor that’s exceptionally fast and offers Nvidia’s G-Sync to keep things moving smoothly on its WQHD display. But at this price point—and perhaps even a bit cheaper—there’s somewhat better options that offer similar speeds and better panels.