Clusters of friends are huddled around computers and flat-screen televisions, bent over the edge of their chairs and cushy couches. They rarely break eye contact, yet maintain animated conversations. Nearby, a solitary gamer is intensely concentrating as he plays “League of Legends.”

Lime green walls and tall drop-ceilings frame this video-game oasis, where there are as many computers as a major university’s high-tech computer lab, but without the feeling of a computer lab at all.

Welcome to Game On, a gaming cafe discreetly tucked away in a Kenmore strip plaza, where you’ll be transported back to your parents’ dimly lit basement, reminiscing about days lazily spent staring at a TV screen and pounding away on a game controller.

Game On is one of at least five spots in the area where you can play video games outside of your home, whether you are a casual or serious gamer or just someone looking for something unique to do.

Vivid VR propels you into a new virtual world after donning their headsets that allow you to fully immerse yourself while fighting robots and racing expensive cars. Run around a 22,000 square foot tactical laser tag arena like a character in “Call of Duty” at Buffalo Battleground. Create your own video game (or play another local creation) at Buffalo Game Space.

Pass more time than you probably expected to on an old-school pinball machine at Misuta Chow’s while drinking a sake and spending your quarters trying to beat your friend at skee ball.

[Related: A reaction to the gaming experience at Misuta Chow’s]

Local gamer Aj Rachetta, a 20-year-old SUNY Buffalo State student, has gaming equipment at home, but still frequents Game On with his friends, mostly for the social aspect.

“It’s almost like a culture — there’s just something about being surrounded by people who have similar interests as you do and having a place where we can all meet up,” Rachetta said. “It’s a lot different than calling your friends over and sitting on the couch.”

On a particularly gloomy day, I saw what Rachetta was talking about when I brought along my eager, game-loving sister, Alexandra, to Game On. I figured beating her at “Mario Kart” would taste even sweeter in public, and it did (twice).

Sitting on a comfortable loveseat, our eyes glued to the screen, inhaling orange soda, we laughed, we booed and we smack-talked the computer-generated game characters, all in good fun.

Here’s a look at where you can go locally for some fun and games. 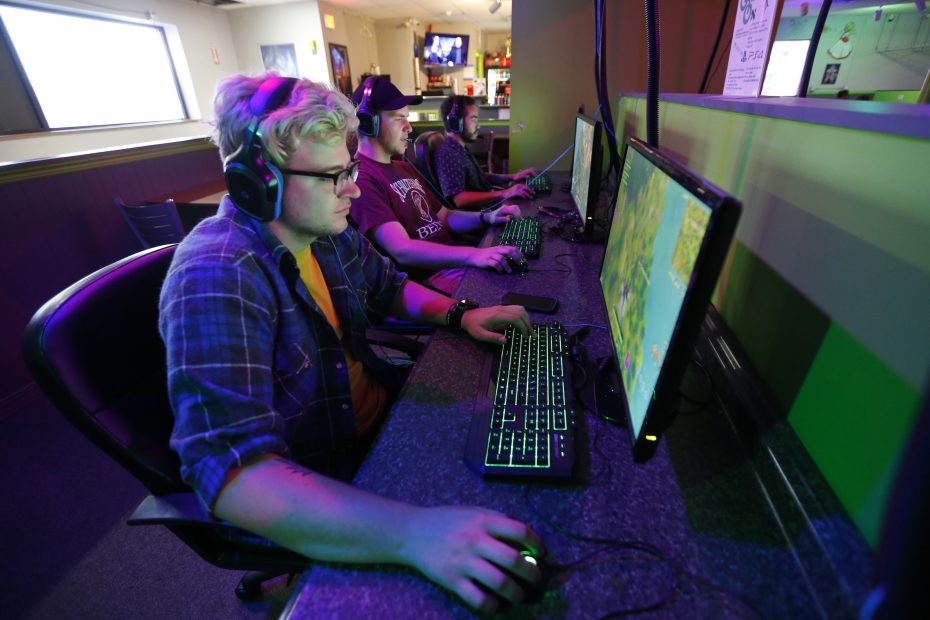 If you thought only bars were open until 4 a.m., try Game On. There are 40 PCs lined up in rows, along with several Xbox Ones, PlayStations and Wiis. Patrons can choose a game from its inventory or compete at an event, including tournaments for popular games like “Fortnite” and “Madden.”

Fueled by Pizza Logs and Red Bull, gamers can play into the wee hours of the morning, lounging on comfortable couches illuminated by computer screens. 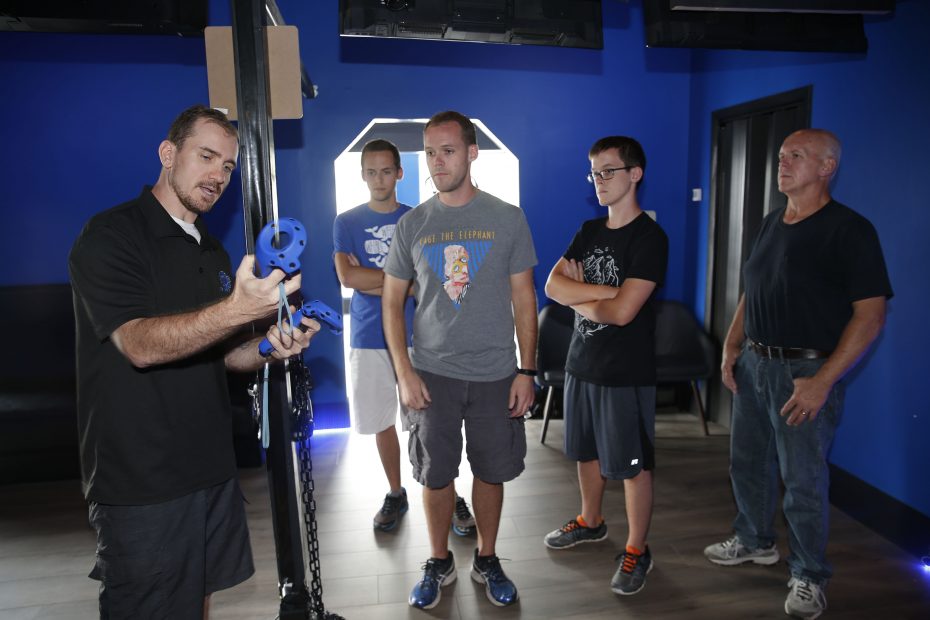 Immerse yourself in a futuristic world fighting robots or battling giants after donning virtual reality equipment (a headset and hand controllers). Sensitive sensors follow your movements while the game is broadcast on a screen outside the curtained room for others to watch.

“It can give you the feeling of when you step off a plane when you go on vacation,” said owner Ken Milligan. “But you’re doing that in your hometown because it’s something that just going to completely take over what you see and what you feel.”

Milligan describes virtual reality as a social experience, one best done with friends or family, and even an intense workout. “Beat Saber” is “similar to ‘Guitar Hero’ but you actually have lightsabers in your hand.” Milligan said you could even lose weight while playing (and master your Jedi skills).

Vivid VR recently moved from its Elmwood Avenue location to this larger one in Depew that has more gaming stations and four racing simulators.

Play alone or with friends, choosing from more than 20 games. Reservations aren’t required, but to guarantee a spot, they can be made over the phone or online. Each 30 minutes of playing time costs $15 per person or $25 per hour. Everything is provided, but it is suggested that you wear comfortable, robot-fighting-worthy footwear. Visit vividvrgaming.com.

Who hasn’t dreamed up their own virtual world from scratch? Buffalo Game Space is helping people make their dream world a reality, virtually. The non-profit has been helping people bring their gaming visions to life for years, offering resources, equipment and mentorship to anyone with a membership.

“Games are what we do,”  said Chris Langford, vice president on the BGS Board of Directors. “Our goal as a non-profit is to help bring together and provide resources to the incredible community of artists, designers, musicians, and programmers in Western New York, all with a focus on making games. Whether you’re an industry veteran int the game development industry or just someone who’s interested in taking the first step in making your own game, we’ve got something to offer to you.”

A variety of new programs start this weekend (Sept. 7 to 9) with an event where attendees have 48 hours to create a video game based on a theme.

On Sept. 13, you can share you work, provide feedback for others and network at the next bi-weekly free meeting. And BGS is hosting its third annual Fall Workshop series starting Sept. 19 through Dec. 5 with attendees learning how to create their own video game. The first of 10 workshops on Sept. 19 is “Intro to Game Design”; the series concludes with a game jam the weekend of Dec. 8.

A free, basic membership grants members access to free events, online forum, and registration to workshops. With a paid membership, ranging from $10 a month to $200 a month, members receive access to the space to play and create games along with hefty event discounts. Meetups and events are held often with many being free and open to the public. Visit buffalogamespace.com.

Live out classic video games like “Call of Duty” or “Battlefield” while running around a 22,000-square-foot building and chasing your friends with lasers.

“Other places in the area do a traditional, or what they call ‘classic’ laser tag,” said owner Brett Burnsworth. “Ours is a more tactical experience, more mission-based. It’s more in line with what you would see on a modern-day video game in like ‘Call of Duty’ or ‘Battlefield.’ ”

Gamers can stay fueled at its full kitchen and refreshed at a full bar. Aside from classic finger food and a kid’s menu, Burnsworth said they make great hand-tossed pizzas and steak. The bar sells draft beer, soda and cocktails. Laser tag costs $20-$25. Airsoft requires the purchase of a protective package (around $20) and costs $25 for four hours of playing time and $40 for an all-day pass. Visit buffalobattleground.com.

Where can you drink sake, play pinball and encompass yourself in hot pink? At Misuta Chow’s, a newly opened, Japanese-inspired bar-arcade-restaurant on Main Street. It has a small and often-crowded second-floor arcade with skee ball machines, a handful of pinball machines and two walls of ‘8os video games.

Besides becoming a viral photo spot seemingly overnight as people post Instagram photos posing in a glittery, hot pink stairway, the bar has seen full crowds lining up to play skee ball or launch a pinball through one of the old-school machines. The kitchen serves authentic Japanese food listed succinctly on a one-page menu. Visit misutachows.com.

[Related: Double tonkatsu and more in Starters at Misuta Chow’s]

Share
Previous The Xbox Adaptive Controller goes on sale today and is also now part of the V&A museum’s collection
Next Fastest Windows 10 on Arm PC yet: Lenovo Snapdragon 850 2-in-1 passes FCC hurdle

Why tapping into gaming should be top of mind for brands

The new decade kicks off with a trove of high-profile releases. Tracking all the gaming …