TechCrunch has learned that the Instagram longer-form video hub that’s launching tomorrow is called IGTV and it will be part of the Explore tab, according to multiple sources. Instagram has spent the week meeting with online content creators to encourage them to prepare videos closer to 10-minute YouTube vlogs than the 1-minute maximum videos the app allows today. Videos can range from 15 seconds to 60 minutes.

Instagram is focusing its efforts around web celebrities that made their name on mobile rather than more traditional, old-school publishers and TV studios that might come off too polished and processed. The idea is to let these creators, who have a knack for this style of content and who already have sizeable Instagram audiences, set the norms for what IGTV is about.

Instagram declined to comment on the name IGTV and the video hub’s home in app’s Explore tab. 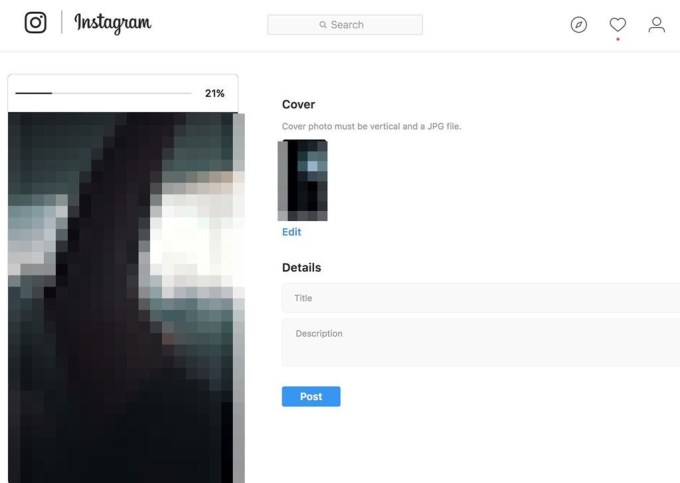 [Update: A screenshot of the uploader for the new long-form video feature and more from Matt Navarra shows Instagram will allow clips between 15 seconds and 60 minutes.]

We’ll get more information at the feature’s launch event in San Francisco tomorrow at 9am Pacific.

Following the WSJ’s initial report that Instagram was working on allowing longer videos, TechCrunch learned much more from sources about the company’s plan to build an aggregated destination for watching this content akin to Snapchat Discover. The videos will be full-screen, vertically oriented, and can have a resolution up to 4K. Users will be greeted with collection of Popular recent videos, and the option to Continue Watching clips they didn’t finish.

The videos aren’t meant to compete with Netflix Originals or HBO-quality content. Instead, they’ll be the kind of things you might see on YouTube rather than the short, off-the-cuff social media clips Instagram has hosted to date. Videos will offer a link-out option so creators can drive traffic to their other social presences, websites, or ecommerce stores. Instagram is planning to offer direct monetization, potentially including advertising revenue shares, but hasn’t finalized how that will work.

We reported that the tentative launch date for the feature was June 20th. A week later, Instagram sent out press invites for an event on June 20th our sources confirm is for IGTV.

Based on its historic growth trajectory that has seen Instagram adding 100 million users every four months, and its announcement of 800 million in September 2017, it’s quite possible that Instagram will announce it’s hit 1 billion monthly users tomorrow. That could legitimize IGTV as a place creators want to be for exposure, not just monetization. 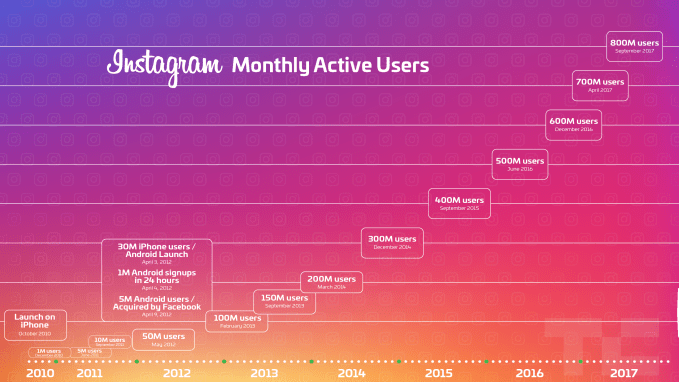 IGTV could create a new behavior pattern for users who are bored of their friends’ content, or looking for something to watch in between Direct messages. If successful, Instagram might even consider breaking out IGTV into its own mobile app, or building it an app for smart TVs

The launch is important for Facebook because it lacks a popular video destination since its Facebook Watch hub was somewhat of a flop. Facebook today said it would expand Watch to more creators, while also offering new interactive video tools to let them make their own HQ trivia-style game shows. Facebook also launched its Brand Collabs Manager that helps businesses find creators to sponsor. That could help IGTV stars earn money through product placement or sponsored content.

Until now, video consumption in the Facebook family of apps has been largely serendipitous, with users stumbling across clips in their News Feed. IGTV will let it more directly compete with YouTube, where people purposefully come to watch specific videos from their favorite creators. But YouTube was still built in the web era with a focus on horizontal video that’s awkward to watch on iPhones or Androids.

With traditional television viewership slipping, Facebook’s size and advertiser connections could let it muscle into the lucrative space. But rather than try to port old-school TV shows to phones, IGTV could let creators invent a new vision for television on mobile.

KZen is about to release ZenGo, a mobile app to manage your cryptocurrencies securely and …